Since this South Dakota vs. Wayfair case, this now means that even if you don’t have a physical presence in a state that once you reach a threshold of sales or units sold ($100K and as low as only 100 units) in some states, you will be required to collect and remit sales tax to the state. This is in addition to the nexus created as an FBA seller with your stock (for example) and other states’ reporting requirements.

The U.S. Supreme Court is about to render its decision with the South Dakota vs. Wayfair case. This may change the direction as to how sales tax is handled in the U.S. Let’s review how we got to this point and the ramifications of a U.S. Supreme court decision in favor of South Dakota or Wayfair. 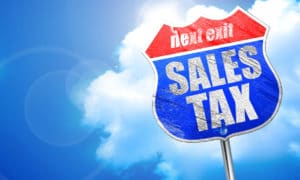 What is more likely to happen in the U.S., where states are losing a fortune in uncollected sales tax, has happened in the U.K., where the government came down against Amazon.co.uk and required compliance with VAT (valued added tax) or suspend their Amazon account).  According to the National Audit Office, an estimated £1.5 billion has been lost in unpaid VAT tax from online sellers in the last year.

Some 60 percent of these sellers come from China, sending over bulk quantities of products to the UK, where they are sent to warehouses to be distributed.

Now back to the U.S., coming up at the end of June is the big case many have been waiting for where the U.S. Supreme Court will rule on the landmark case, South Dakota v. Wayfair (a big online seller).

The U.S. Supreme Court decision will either:

*It seems likely the U.S. Supreme Court will rule in favor of South Dakota, which will overrule its decision in Quill v. North Dakota—the case that forbids states from requiring an out-of-state seller to collect the state’s sales tax when the seller does not have a physical presence in the state.

Assuming the Supreme Court agrees with South Dakota, it will overrule Quill, providing as much relief as the states are hoping for, or it will lead to more litigation over a new issue.

If Quill falls, the substantial nexus may be discarded, and the fall-back will be the Due Process Clause’s purposeful availment standard. The question will then become when a business purposefully avails itself of a state’s markets, benefits, and/or protections?  For example, does placing cookies on website visitor’s computers show purposeful availment? Time will tell.

If the court upholds the current “physical presence” rules in favor of Wayfair, a state like Georgia (as one example) cannot make out-of-state sellers with no physical presence collect and remit sales tax to the Georgia Department of Revenue. But don’t get too excited just yet.

Because, now that Georgia has adopted this new legislation, sellers meeting the requirement will be faced with the register/remit or report dilemma. Most sellers will likely choose to register and remit, and that is what we recommend also.

If the court rules that physical presence should not be the only factor in determining nexus (rule in favor of South Dakota), then Georgia (and other states) may consider amending the new law to eliminate sellers’ option report sales at a certain threshold to the state. Sellers’ only option will be to collect and remit sales tax if economic thresholds are met.

What does this mean to an Amazon FBA Seller?

At the end of the day, this will not affect Amazon FBA sellers from needing to collect and remit in the states where they have stock, but it will likely add more states where they may have reached thresholds with economic nexus. In the end, more compliance is coming, and that starts with getting registered with sales tax permits.

Hopefully, the states with guidelines for economic nexus will increase the number of units sold in each state (200 in a calendar year)  before you have to register vs. the sales levels of $100K, low end in a calendar year. This would seem to be more reasonable.

For more information on sales tax and which costly mistakes to avoid, click here.