Is Your Amazon Inventory Subject to Seizure for Not Paying Sales Tax?

Is Your Amazon Inventory Subject to Seizure for Not Paying Sales Tax?

Your Amazon inventory may be in jeopardy if you are not in compliance with sales tax. You may not be up on all the changes with sales tax cases over the past year, from the Amnesty period this past fall (2018) to Amazon collecting sales tax in Washington and now Pennsylvania. It is apparent that as an Amazon FBA sellers, having stock in a third party, Amazon FBA warehouse creates nexus. This means the third-party seller has to collect and remit sales tax. There is a large group of sellers who are taking the position that they don’t have nexus for a host of reasons, including Amazon owns the inventory…and there is no requirement to collect and remit sales tax, or perhaps they feel strongly that Amazon should collect and remit and therefore third-party sellers should collect and remit. Even with the Massachusetts recent court case where they could obtain the list of Amazon FBA sellers to reach out to them for past sales tax due, many sellers, especially foreign sellers, are taking the position. The states are now going after sellers (obviously not true with the Massachusetts case), and the states have no leverage against foreign sellers outside the jurisdiction. 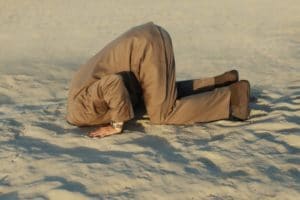 Please don’t bury your head in the sand when it comes to your sales tax responsibilities.

It is commonly understood that states share information. States like California and Washington did not need to get the list of Amazon FBA sellers from Massachusetts. They already figured out their own method to determine who has stock in their state and, therefore, send a sales tax notice to for payment.

Before you take a look at the remedies available to the states to issue a sales tax lien and the devastating impact that may have to paralyze you financially, let’s take a look at how other countries have handled third-party sellers not collecting or remitting sales tax (or equivalents, VAT (Value Added Tax) in the EU, and GST (Goods and Services Tax) in Australia.

In the EU, it has been an issue that Chinese sellers (and others) are not collecting and remitting VAT. VAT ranged from 17% in Luxembourg to 27% in Hungary in 2018. This means if a seller is NOT collecting and remitting VAT (after meeting certain thresholds), they really have a 17-28% price advantage, which is a massive profit and price advantage.

Many countries are aware of this, and their main solution to fight back was either to put pressure on Amazon, which occurred by the UK government, or directly go after FBA inventory, which has occurred in Germany (see https://www.channelnewsasia.com/news/business/german-tax-office-targets-chinese-online-retailers–handelsblatt-9833092). Because of this, it is very commonly known that if someone outside the UK wants to sell on Amazon.co.uk, registration for VAT is required (yes, there is a threshold that varies if you have a UK entity vs. an out-of-country entity).  In Australia, Amazon will charge 10% GST fees for Selling on Amazon after 1 July 2017 for Australian-based Amazon sellers, unless they are registered for GST.

Sellers who see this trend hope that they will be off the hook because Amazon.com has completed deals with both Washington and Pennsylvania to collect sales tax on behalf of third-party sellers. Even if this trend continues, the seller still has nexus, is responsible for registering for a sales tax permit, file sales tax returns, and comply with other selling requirements as a third party, independent seller, which may include state income tax or franchise tax returns.

In the meantime, the states want their money for past sellers. It is fairly easy for the states to get leverage against a U.S. seller with a sales tax notice, and eventually a sales tax lien (which lasts up to 10 years in California and may be carried across state lines to your home state and attached to bank accounts to seize the money owed.

Stop Giving the “Middle Finger” to the U.S. States in Regards to Sales Tax

The issue is with foreign sellers who continue to give the middle finger to the U.S. states regarding sales tax, leaning on the federal tax treaty as a crutch as to why they don’t need to pay ANY U.S. taxes (which is absurd). Yes, may you find a couple of states that side with the federal tax laws, but by and large, state law is separate from federal law, and sales tax is not covered by a federal tax treaty (sorry, we do that backward here in the U.S.)?

Basically, foreign sellers are continuing to “poke the bear,” the state’s department of revenue, and they will figure out they have one of three choices:

What is the Process for a State to Go After Past Sales Tax?

Let’s look at where you have your most sales and your biggest threat: California:

This is from an email reply from a Technical Advisor with the California Department of Tax and Fee Administration:

“For sales and use taxes, Revenue & Taxation Code (RTC) section 6796 provides the CDTFA with authority to seize and sell property, both real and personal.  This statute has existed for many years.  Additionally, similar statutes provide the same authority for many other tax and fee programs administered by the CDTFA. Additionally, this is generally not the first action we would take to obtain compliance.  We would first try to obtain voluntary compliance, then likely take other actions to prompt compliance before considering seizing and selling property.  Worth mentioning, the CDTFA routinely contacts unregistered retailers to determine if they need to register and pay tax on their sales to California customers.”

A California Sales Tax Lien will Stay on the Books for up to 10 years!
You Don’t Want to be on this list…

A California sales tax lien will stay on the books for up to 10 years, and the state can renew for up to 30 years. California even has a list of its Top 100 Tax Debtors (a list you don’t want to be on). Here is a link to the California collection procedures for all taxes, including sales tax in their state. If you are a U.S. seller and receive a sales tax lien from a state, this can have a devastating impact on your personal credit, which will affect everything from getting a job to insurance rates to any financing, a car, home, credit card, college… The biggest issue is that even if the lien is released, it may affect your credit for 7 years.

From Publication 54 in California, it states the following: “The lien attaches to all your real property, such as your house or rental property. It is not our policy to seize and sell your primary residence, but we will enforce the lien on your residence if you sell or refinance your home. Once a lien is recorded, your credit rating will be negatively affected. Your ability to get a loan to buy a house or a car, get a new credit card, or sign a lease may be compromised. After we have recorded a lien, we can release it, as explained below. Please note: Even though a lien can be released, it remains on your credit history for seven years (unless the lien was filed in error).”

As a practical matter, is California going to go through all the steps to seize your inventory if you owe $5K in back sales taxes, plus penalties and interest? At this point, it is not likely, because there are labor costs and resources required to seize inventory. That does not mean that California won’t change their process or put more pressure on Amazon, similar to what the UK government could do for UK Amazon sellers.

Not Becoming Compliant with Sales Tax and Hoping Laws Change in Your Favor is a HIGH-RISK game to Play.

This is a year that is expected to bring more changes to sales tax rules for online sellers. The key to any change is to be clear on the current rules and what you must do for compliance and make changes as state or federal laws change. What does not work, which several sellers are taking, is hoping the laws will change in your favor, and somehow you will be 100% off the hook. That is very unlikely and a HIGH-RISK game to play.

It is strongly recommended that any seller currently sells on Amazon FBA (or other platforms) comply with sales tax. Let your customers pay sales tax and pay the fees to get into compliance and automate the process. Even if the fees dip into your profits, it is, after all, the cost of doing business. What you want to avoid is the landmine of surprises, over the next 3-5 years, with sales tax notices and potential sales tax liens showing up at the worst times, when you are about to close on your new home, obtain a home equity line of credit, finance or lease a car, or use your credit cards for more inventory (and you find the limit has been cut by 80% because your credit score plunged over 100 points or will it? See the updated impact with liens to your personal credit)… the list goes on.

In the end, don’t force the states to seize sellers inventory as their only option, even if at a loss, to “prove a point” to millions of other sellers, or collectively put enough pressure on Amazon to suspend accounts if you are not in compliance. The better approach would be not to ‘ring this compliance bell’ and collectively get into compliance as sellers.