Our Process to Determine Which States and Dates You First Triggered Nexus, and Your Exposure.

If you are not selling on a marketplace facilitator platform, Shopify, for example, you will need to track all 44 states and DC as to when you pass the economic thresholds. Keep in mind, 26 states have transaction thresholds of 200 transactions OR $100K in sales or more.

Finally, some states have special requirements known as a “remote seller notice and reporting.” These requirements have late fees up to $20,000.

A Sales Tax Nexus Analysis is designed to identify where and when your business has triggered nexus activities within a state.

In the end, you will be clear on which states you have nexus and, more importantly, the start date in which your business has triggered nexus in a state. 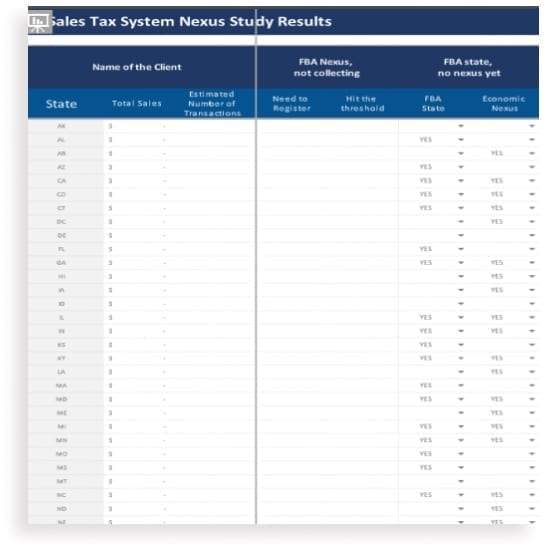 Additional Platforms or Shopify/website $147 per year. For example, sell on Amazon (one platform) for two years or less, which is included in the prices above. Sell on Amazon plus Walmart for two years, that is $147 extra.

EIN Service. Foreign sellers will require an EIN to register you for sales tax permits after your  Sales Tax Nexus Analysis is completed. Your start date in the U.S. may trigger previous U.S. tax returns. We will refer you to a CPA firm for direction. We do provide the EIN service. Learn more here.

Sales Tax Consultation. It starts at $297 for 30-minutes. Included in our Platinum package. Learn more here.

If you have multiple entities or accounts that need a sales tax nexus analysis, email support to inquire about our multiple entity discounts. Each entity or account requires a separate analysis.

Data pulled from your platform in a CVS file but not sorted by month and by states which is complete through a pivot table process. Instructions are provided for you do to this on your own

Data sorted via a pivot table by state, by month, by transactions, and by sales.

After payment and completing our Sales Tax Analysis Application and receiving all your sales data our team will review and start working on your sales tax nexus.

Go to this link to complete our Sales Tax Analysis Price Quote Form and our team will reply within 48 hours with more questions and or your price quote.

Our estimated amount of tax due including interest and penalties is an estimate. An e-commerce accounting firm is recommended (or software) for an accurate amount.

Note: Time frame will also be impacted by availability from our team. If our times frames are expected to be outside of the times above we will let you know before starting any work.
Case Study Pricing

Selling on one platform and two years and under – include in our based pricing.

Decide to sort your own data into a pivot table with instructions provided to sort taxable sales by state, month, and year and are included in our base pricing.

Sales Tax System sorts your sales data into pivot tables $197 per year.
An additional year of sales $97 per year

To get into compliance with sales tax, you first must determine which states and when you first had nexus. Once you determine these two factors, you can move forward with your sales tax registrations.

Moreover, you also must track the states where the marketplace facilitator will collect and remit on behalf of the seller (on platforms including Amazon, Walmart, eBay, Esty, and others).

What triggers nexus in one state doesn’t necessarily trigger nexus in another state. We understand the nuances, and we’ll make it clear for you.

How big is your nexus footprint?

Let’s find out. Once we complete our state-by-state analysis of your business activities, you’ll be able to determine where to register for a sales and use tax license or permit.

So you find out you have nexus. What then? Don’t worry, you’ll walk away with a solid understanding of what you need to do next to move toward compliance.

Keep up to date with the latest strategies from NCP. Subscribe today.

What are the penalties and costs of non-compliance?

If you have nexus in a state and have a responsibility to collect and remit sales tax, the states will assess both penalties on late sales tax returns, plus interest for being late with sales tax.

See the chart below for examples:

Florida has the most aggressive penalties for WILLFUL FAILURE to collect sales tax. If you had only $3,500 in sales in Florida, which would result in over $300 in sales tax owed, that is a 3rd DEGREE FELONY ($300 up to $20,000), punishable up to 5 years in prison and fines up to $5,000! See this resource for more details: https://www.floridasalestax.com/florida-tax-law/criminal-sales-tax-defense/.

What’s involved in a sales tax nexus analysis for determining which states to register for sales tax?

There are several factors involved in a sales tax nexus analysis, which include evaluating all your sales data from all the platforms you use to sell.

Number of Platforms. Those marketplace nexus platforms may include Amazon, Walmart, eBay, Etsy…We will need all your data from each platform, sorted by year and by state, to determine when you first had nexus, and whether it was before or after when marketplace nexus was enacted in the state.

If you are selling on a non-marketplace platform, such as your own website or a Shopify store, those sales are reviewed for economic nexus considerations. There are several states that combine your marketplace sales with your non-marketplace sales to determine nexus thresholds. For example, in some states, you might have 195 transactions on Amazon and only 5 on your Shopify store, and if that state combines those sales, those 200 total transactions will create sales tax nexus for that state.

Years Selling. The number of years you have been selling is important, since economic nexus laws came into play in June of 2018 and marketplace nexus that started later that year. It is possible you have a past liability in several states and may be able to close out your sales tax registration after you are caught up. Trailing nexus is a factor in these situations, which means in some states you will need to file a return until the end of the year, or a full calendar year after your final sales tax return was filed.

Data Sorting. If your data is already sorted by state and by month, with both sales and transactions that will impact your price and our time frame to complete your sales tax nexus analysis. We provide steps to help you sort your data and pivot tables required to evaluate if you don’t use software that does this for you.

How do you get on track?

In our evaluation, we will address the balance of crossing nexus and whether you should register at that point or later, based upon your economic exposure.

How do you pay and what happens next?

You may pay on our secure link on this page and, after payment, you will receive a welcome email with a link to our sales tax nexus form to complete with the required data for us to complete the service.

Once you complete the form and upload your sales data, we will review the best way to move forward to complete your sales tax nexus analysis.

Which states to register?

You are required to register in the states you have sales tax nexus. If you only sell on a marketplace such as Amazon, you will want to receive our updated sales tax nexus compliance chart for 2020 to help you determine where Amazon is collecting and what dates they began collecting, which is very important.

Our sales tax nexus chart will help you better understand the current landscape of economic nexus.

Which states not to register?

Our sales tax nexus analysis will also tell you the states where you are not required to register, either because you don’t have nexus or the marketplace facilitator is collecting and remitting and registration is not required (which is not the case for every state).

After we receive your sales data from all your platforms and you have completed our sales tax nexus analysis web import form, our team will review your data and information to let you know if anything is missing or unclear before we proceed with our internal analysis.

Our team will proceed to evaluate your sales data by year, month, and state, to determine when you created nexus in the state.

We will send you a final spreadsheet with the results, plus a summary email with our recommendations, including the states not to register, to deregister, and which you should register soon.

Our next step is to get you registered in the states that are recommended for compliance. Our sales tax registration process is separate. Learn more at this link.

If I have additional questions on your process, where do I go for support?

You may email our team at [email protected] with any additional questions about our sales tax analysis service.

The next challenge is determining when you first triggered sales tax nexus within a state. Since the 2018 U.S. Supreme Court Case, Wayfair vs. South Dakota, there are new economic nexus states where you must track both transactions and sales in each state to determine when you first had nexus.

The challenge is overpaying for sales tax by not using a correct starting date on your registrations or underpaying and subjecting your business to a 50% fraud penalty – or worse, Florida considers it a 3rd-degree felony.

Peace of Mind, and Clarity

Past Liability and Number of Returns | Do Nothing | Register | De-Register